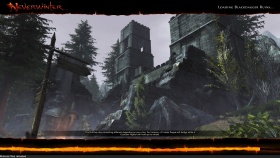 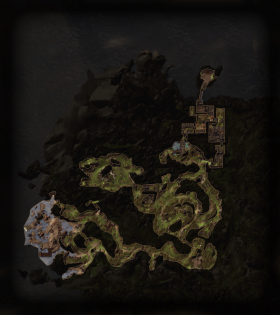 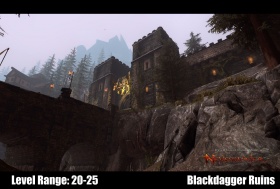 Blackdagger Ruins is a coastal area. This persistent zone is suited for levels 21 and onwards. It was once home to the famous pirate Traven Blackdagger. By the time the adventurer arrives in the area, the Bandits are lead by Jareth Grim.

Blackdagger Ruins
Traven Blackdagger was a pirate captain who terrorized the Sword Coast between Neverwinter and Luskan in the years after the Spellplague. He had gathered a formidable force in his seaside keep and proclaimed himself lord of the lands around it, threatening death to any who opposed him. But when Mount Hotenow erupted, the cataclysm toppled his keep to ruins. Traven and his brother Malus died, buried in the rubble along with all of their ill-gotten treasure.

The ruins of Blackdagger Keep lay forgotten for decades until recently when it was found by bandits and claimed as their hideout. Unbeknownst to them, another power was already at work in the dungeons beneath the keep. A Thay named Kallos Tam discovered the ruins months earlier and was searching for lost magical items. When Kallos saws the bandits, he saw an opportunity to consolidate a power base for the Thayans. Kallos reanimated the Blackdagger brothers as powerful undead under his control. The Blackdaggers and their newfound abilities quickly seized control of the bandits, forcing them to submit to the Blackdagger's rule or die and become undead creatures under their control. Now the Blackdagger Bandits plunder the wealth of the High Road between Neverwinter and Luskan, attacking travelers and merchants who dare to pass by the haunted ruins.

Hearing tales of banditry on the High Road, Neverwinter has placed a bounty on the bandit leader. Meanwhile the Harpers have dispatched an agent to determine if the rumors of a red-robed magic-user seen with the bandits means the Red Wizards of Thay are operating in the area.