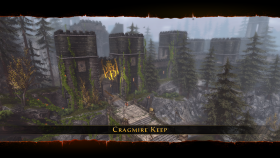 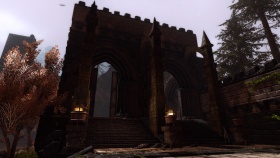 Blackdagger Keep
Blackdagger Keep
Once, the keep of the famed Cragmire noble house stood along the High Road. When it was discovered that the Cragmires were using necromancy to plot against the city, the keep was attacked and mostly destroyed by the Neverwinter army. For over a century, through the Spellplague and the cataclysm, the ruins of Cragmire Keep lay untouched.

Then the Blackdagger Bandits came along and started to rebuild it, using it as their base of operations for all of their raiding and looting along the High Road. If the patrols along the road had been unable to stop the Blackdaggers before, they certainly will have no success in stopping them when the bandits can retreat to a veritable fortress.

Blackdagger Keep is a point of interest located in Blackdagger Ruins.