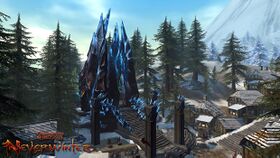 "The dwarf craftsman Baerlck Hammerstone first discovered the mysterious substance known as black ice. Bringing a supply of it to his home in Kelvin's Cairn, he learned the secret of shaping the strong, glass-like material. Starting with simple trinkets and jewelry, he soon discovered that black ice could be forged into weapons and armor of great power. But many of his fellow dwarves disapproved of this new resource, claiming black ice had undesirable effects on those who were exposed to it. Angered by what he saw as petty jealousy on the part of his kin, Baerlck moved his operation to Caer-Konig where the people of the town were only too happy to welcome this lucrative new industry. Caer-Konig's black ice forge has attracted many smiths and craftsmen, as well as merchants and traders who pay high prices for goods forged from the wondrous new material. Baerick and his partners have constructed a mighty forge in the center of Caer-Konig where smiths labor night and day to meet the demand for black ice goods."