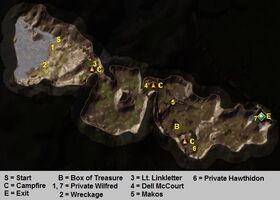 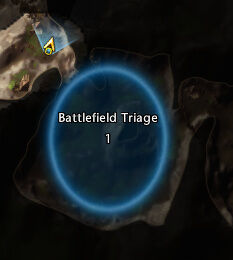 The area where Wounded Soldiers can be found

Lt. Linkletter needs you to find and treat some injured soldiers before the undead can finish them off.

Give First Aid to the Wounded Soldiers on the Battlefield.

Lt. Linkletter
Although we stopped Valindra's main force, the battle is far from over. The battlefield is crawling with mindless undead who lost their masters in the fighting. To make matters worse the enemy is raising our dead to use against us!

Acolyte Neyman is performing a ritual of Kelemvor to lay the newly dead to rest. That is sure to draw an attack here.

I must stay and make sure Neyman finishes her ritual. Could you search the battlefield for any wounded we missed and send them here?

After you finish with the wounded, go to Dell McCourt's camp and tell him our situation.

Dell McCourt
Thank you for aiding the wounded. They would not have survived much longer with all the undead roving about.

I will try to get medical supplies and reinforcements to Linkletter as soon as possible.

Unfortunately we've got problems of our own here!

Note: Completing this quest automatically advances the character to Level 2.

Note: The enemies do not auto-attack and can be ignored.