Ability Scores are general measures of a character's broadest abilities. Not counting bonuses or other modifiers, each score can be between 8 and 18. The six ability scores are: 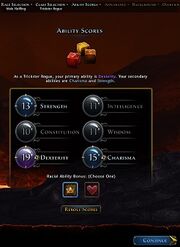 On character creation, ability scores are "rolled" in arrays based on a point buy system.[1]

One or two ability scores selected by the player will also receive a permanent +2 racial bonus.

This is information before module 16.

Characters receive bonuses from each ability score, for each point over 10. The bonus depends on class and their primary and secondary ability scores provide better bonuses.