A Shadow in Rothé Valley

From Neverwinter Wiki
Jump to: navigation, search
A Shadow in Rothé Valley 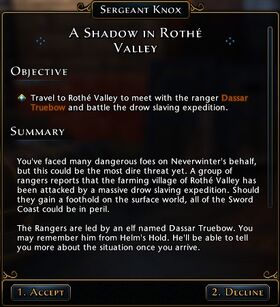 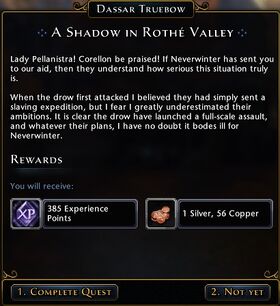 Sergeant Knox
You've Faced many dangerous foes on Neverwinter's behalf, but this could be the most dire threat yet. A group of rangers reports that the farming village of Rothé Valley has been attacked by a massive drow slaving expedition. Should they gain a foothold on the surface world, all of the Sword Coast could be in peril.

The Rangers are led by an elf named Dassar Truebow. You may remember him from Helm's Hold. He'll be able to tell you more about the situation once you arrive.

Dassar Truebow
Lord <character's name>! Corellon be praised! Neverwinter has sent you to our aid, then they understand how serious this situation truly is.

When the drow first attacked I believed they had simply sent a slaving expedtion, but I fear I greatly underestimated their ambitions. It is clear the drow have launched a full-scale assault, and whatever their plans, I have no doubt it bodes ill for Neverwinter.

There is no walkthrough for this quest yet. You can help Neverwinter Wiki by writing one.
Retrieved from "https://neverwinter.gamepedia.com/A_Shadow_in_Rothé_Valley?oldid=498339"
Categories: